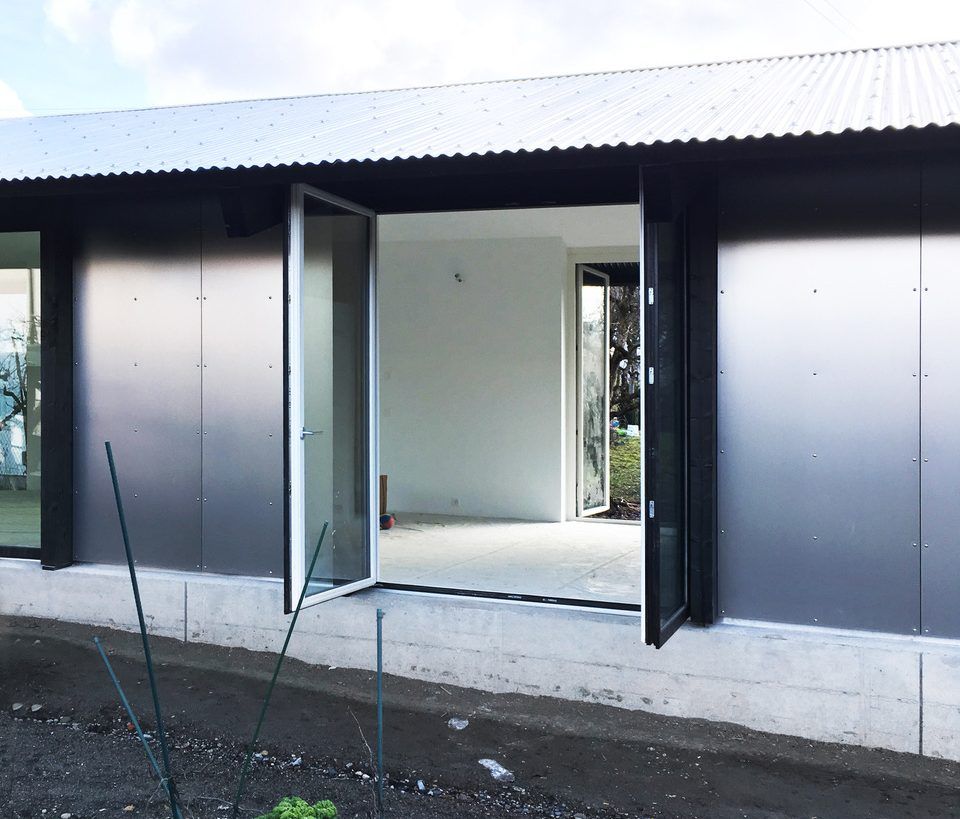 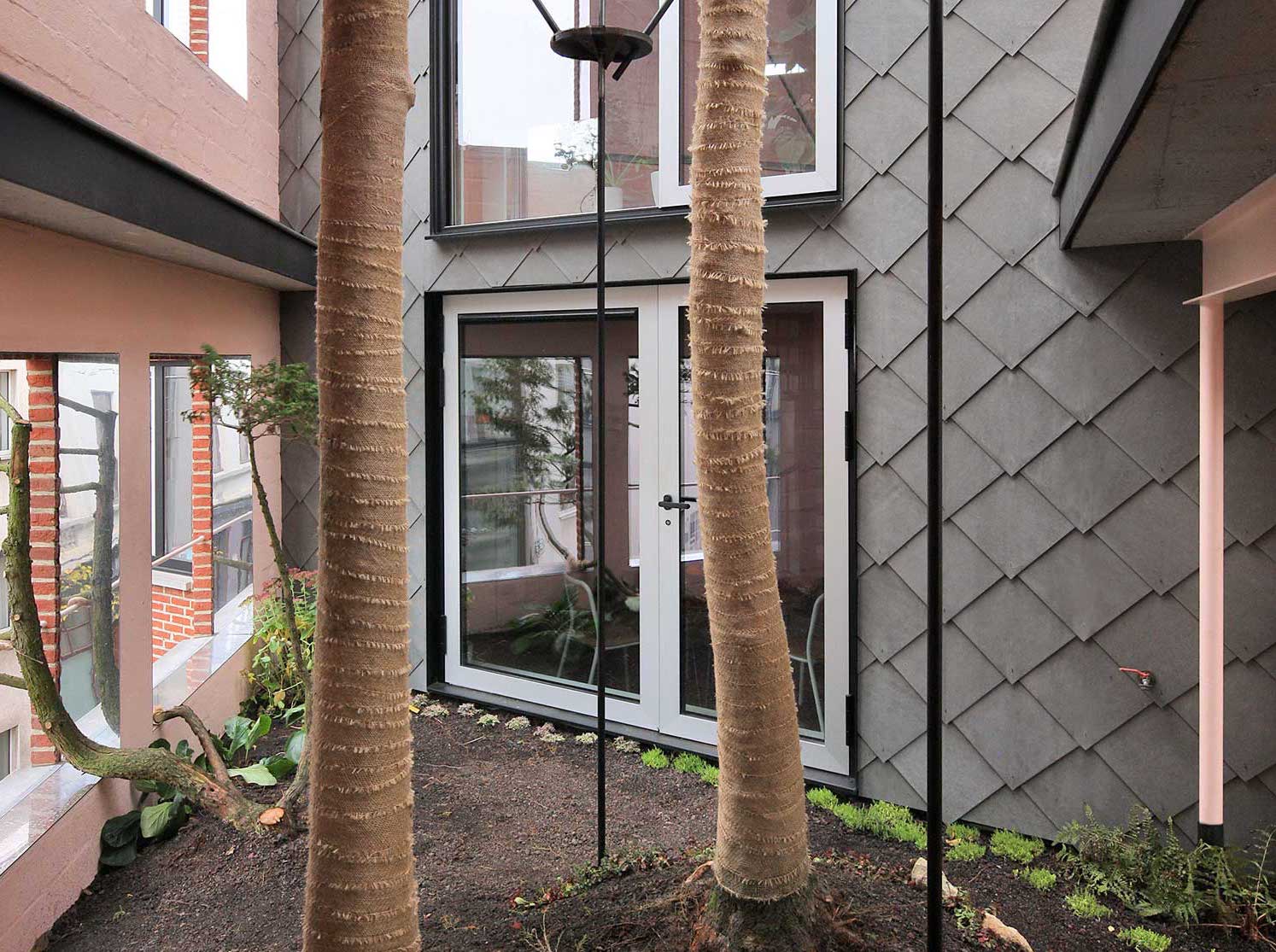 Jan De Vylder (born in 1968) is part of the office of three Flemish architects: Jan De Vylder, Inge Vinck and Jo Taillieu, who met while studying at Sint-Lucas in Ghent. The trio is profoundly rooted in the social and cultural fabric of Flanders. After being a professor at TUDelft (NL) Sent Lucas FAK Faculty of  Architecture and Arts (B), Mendrisio (CH), EPFL(CH), today Jan De Vylder is teaching his studio at ETH Zurich (CH).

With his office based in Gent, they have won many awards such as the Belgian Building Awards in 2010  and recently have been published with Archives Journal of Architecture 06.2018 Architecten De Vylder Vinck Taillieu, on their works. 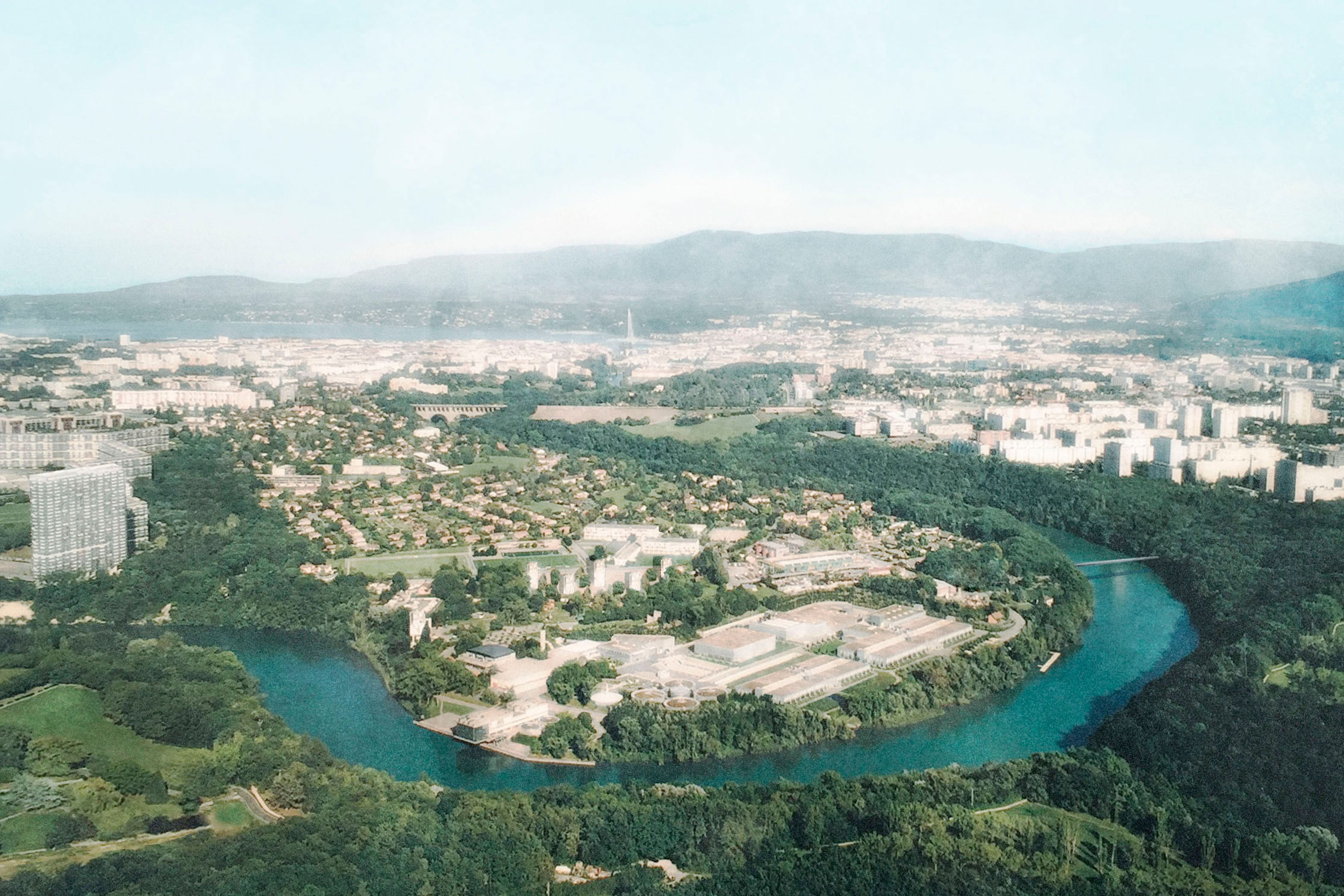 Thierry Buache obtained his Bachelor of Architecture degree from EPFL in 2013 after studying with Dieter Dietz, Franz Graf, Sylvie Pfahler & Jeanne Della Casa. From 2013 to 2014, he worked at the Serrano Monjaraz Arquitectosstudio in Mexico City, and from 2014 to 2015 in Geneva, with ar-ter, an architecture-territory studio. He continued to study the preservation and reuse of existing buildings and received a Master’s degree in Architecture from EPFL in 2017. His Master Project, entitled “La STEP d’Aïre, a new place for artistic creation and dissemination in Geneva“, was awarded the 2017 SIA Prize and the 2017 B&G Ingénieurs Prize for sustainable development. Thierry was appointed by HEAD as assistant for the Interior Design course in 2017, while at the same time working as an independent architect and conducting research into the relationship between art, design and architecture, using the experimental platform of the PLANS/group in Geneva. 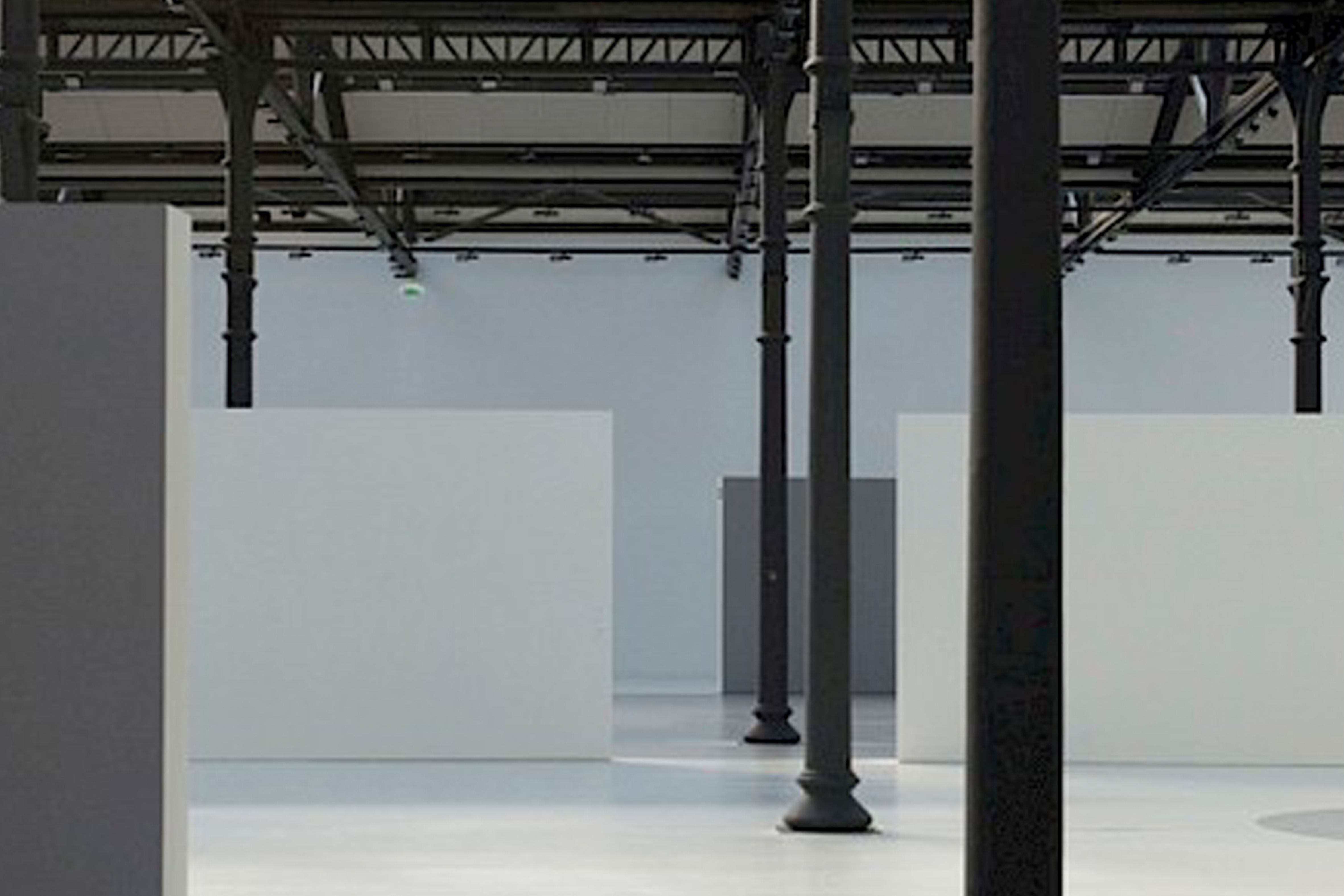 Philippe Rahm (born in 1967) is a swiss architect, principal in the office of “Philippe Rahm architectes”, based in Paris, France. His work, which extends the field of architecture from the physiological to the meteorological, has received an international audience in the context of sustainability. He has taught architecture design at the GSD, Harvard University, USA, from 2014 to 2016. In 2002, Mr. Rahm was chosen to represent Switzerland at the 8th Architecture Biennale in Venice, and was one of the 25 Manifesto’s Architects of Aaron Betsky’s 2008 Architectural Venice Biennale. He participates in 2017 at the Architecture Biennales of Chicago and Seoul. His recent work includes the First Prize in 2011 for the 70 hectares Taichung Gateway Park (Jade Eco Park / Central Park) in Taiwan, completed in 2018, the First Prize for the 1800 m2 Agora of the French National Radio in Paris, a 2700 m2 Exhibition architecture for the Luma Foundation in Arles, France. Monographic books include “Physiological architecture” published by Birkhaüser in 2002, “Distortions”, published by HYX in 2005, “Environ(ne)ment: Approaches for Tomorrow”, published by Skira in 2006, “Architecture météorologique” published by Archibooks in 2009 and “Constructed atmospheres” published by Postmedia, Milan, Italy, in 2014. He is nominee in 2009 for the Ordos Prize in China and in 2010 and 2008 for the International Chernikov Prize in Moscow. He has participated in a number of exhibitions worldwide (Archilab, Orléans, France 2000; SF-MoMA 2001; Centre Pompidou, Paris, 2003-2006 and 2007; Louisiana museum, Denmark, 2009; Guggenheim Museum, New-York 2010, Maxxi, Rome 2014). In 2007, he had a personal exhibition at the Canadian Centre for Architecture in Montreal and in 2018 at the San Francisco Art Institute. Mr. Rahm was a resident at the Villa Medici in Rome (2000). He has held professorships at the AA School in London (2005-2006), at the Mendrisio Academy of Architecture in Switzerland (2004 – 2005), at the ETH Lausanne (2006 – 2007), at the School of Architecture of the Royal Danish Academy of Fine Arts of Copenhagen (2009-2010), in Oslo at the AHO (2010-2011), at Columbia University (2016). From 2010 to 2012, he held the Jean Labatut Professorship in Princeton University, USA. He has lectured widely, including at Yale, Beijing Forum, UCLA and the ETH Zürich. In 2018, he is the editor of the “Meteorology” column for the international architecture magazine Domus. 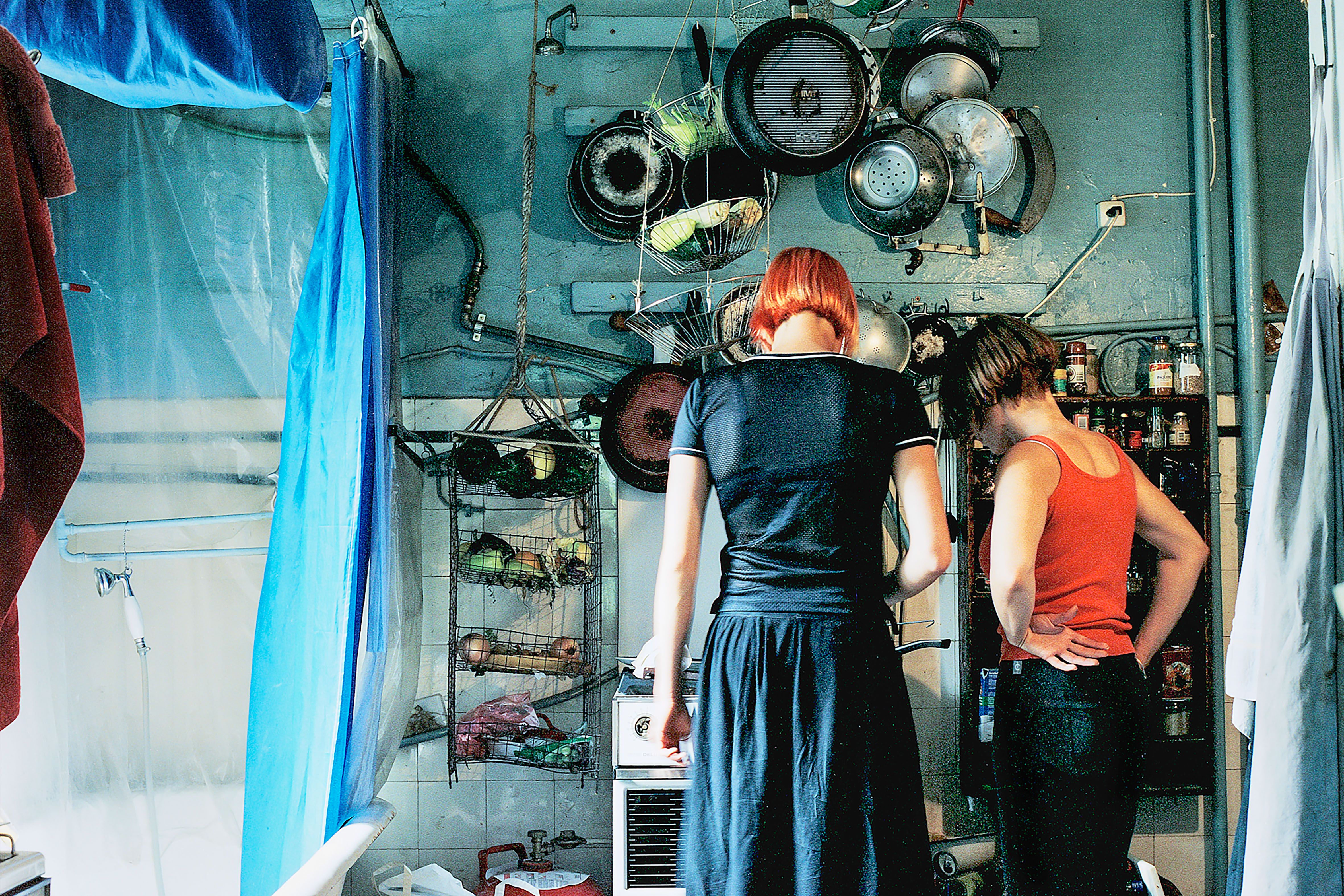 Following a training in International Relations (Graduate Institute of International Studies, Geneva) and a DEA in Social Sciences (Ecole Normale Supérieure Paris / Ulm), Luca Pattaroni defended a thesis of sociology cotutelle (School of Higher Studies in Social Sciences , Paris / University of Geneva) under the direction of Laurent Thévenot (EHESS) and Jean Kellerhals (University of Geneva).After 5 years as an assistant at the Faculty of Law (University of Geneva), he was visiting scholar at Columbia University (New York). He is now working in the Laboratory of Urban Sociology (EPFL) and is associated with the Group of Political and Moral Sociology of the School of Higher Studies in Social Sciences (GSPM / EHESS). In 2011, he was Visiting Professor at the Federal University of Fluminense (Brazil).His research and publications focus on urban and cultural policies, housing, social movements, changing lifestyles and, more broadly, common issues in contemporary cities.A specialist in mixed methods as well as sociological and political theory, he seeks to articulate a fine analysis of the pluralism of lifestyles and a questioning on the political and moral issues of the composition of a common world.